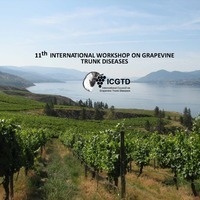 Grapevine trunk diseases (GTD) are a complex known to be caused by a wide range of taxonomically unrelated fungi. Diseases within this complex are responsible for a broad diversity of vascular and foliar symptoms, which result in an overall decline and eventual death of the grapevine. Though GTD are thought to be as old as vine cultivation; it has been relatively recently when their significance and impact on vine health have been fully recognized. Today, GTD are considered one of the main biotic factors reducing both yield and lifespan of vineyards, which translates in substantial untenable economic losses to the grape and wine industry worldwide.

The emerging of these diseases in the early 1990s, and the urgent need by growers and industry of effective management strategies, focused the attention of scientists around the world. As a result, a meeting in California took place in July of 1998 in which participants and founding members agreed and developed the structure and objectives of the International Council on Grapevine Trunk Diseases (ICGTD). Since then, the primary goal of the ICGTD has been to promote science, and encourage collaborations and exchange of information among scientists and industry partners, on issues pertaining to GTD.

Further information, including deadlines for abstract submission, registration and booking of accomodation will soon follow