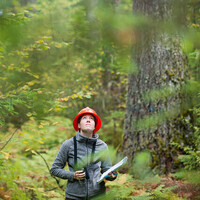 Historically, western management approaches have often struggled to make clear and direct links between natural resource management goals and people. The Confederated Tribes of the Umatilla Indian Reservation’s (CTUIR) Department of Natural Resources (DNR) has organized its functions and responsibilities through a focus on traditionally gathered foods identified by the CTUIR community as “First Foods,” including water, fish, big game, roots, and berries.  The First Foods serving ritual in the community’s ceremonies and cultural events calls attention to the reciprocity between people and the Foods upon which we depend.  The physical and temporal organization of First Foods manifested in the serving order is also observed in the active physical and ecological processes occurring on the landscape and is therefore utilized to guide applied management.  We utilize First Foods to bring attention to ecological processes and prioritize efforts to re-naturalize those processes that produce and sustain First Foods. While the First Foods management approach provides a direct and culturally appropriate means to monitor and report restoration success to the Tribal community, it also offers a model approach for non-Tribal resources managers responsible for water, water quality, fish, wildlife, and their habitats.  Management examples are provided in the form of a River Vision approach to floodplain restoration, which the CTUIR applies in five subbasins and 43,900 km2 in NE Oregon and SE Washington, USA. A preview of an Uplands Vision, including forest management, is also provided.

Eric Quaempts has served as the Director for the Confederated Tribes of the Umatilla Indian Reservation’s (CTUIR) Department of Natural Resources (DNR) since 2004, and developed and implemented the First Foods management approach in 2006-07.   An enrolled member of the CTUIR, Eric has spent most of his life living on the Umatilla Indian Reservation, and his professional career has been focused in working on the reservation and in the Ceded Lands of the CTUIR.

He has presented the CTUIR’s First Foods management approach in a variety of forums, including state and national professional meetings, local, state, and federal governments, inter-tribal forums, and at the Universidad de Concepcion in Chile and to aboriginal communities and land managers in Australia.

Eric earned his Bachelor’s of Science in Wildlife Science from Oregon State University.

His personal interests include family – his daughter Sascha is eight - fly-fishing, photography, traveling, cooking, and eating.