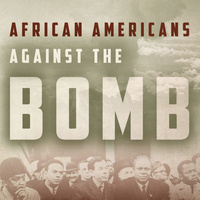 African Americans Against the Bomb

Dr. Linda Marie Richards will lead a discussion about human rights and the 2017 UN Treaty on the Prohibition of Nuclear Weapons. She will provide an update on the progress for the Treaty and share some of the arguments used in the past by leaders, including Indigenous and African American leaders, to "ban the bomb." Then she will open the space to facilitate conversation and listen to concerns among participants about social justice and the current nuclear arms race.

Richards, a historian of science, is currently working on her book manuscript, "Human Rights and Nuclear Wrongs." She is the Co-PI on the National Science Foundation grant, "Nuclear Environmantes and the Downwinders Case" and teaches for the School of History, Philosophy and Religion.