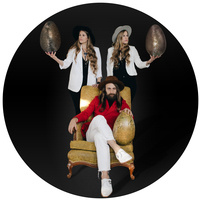 The American Strings series launches a brand new season, outside on the Student Experience Center Plaza, with a conversation and live performance by the rising stars of American folk music, Shook Twins.

The program is free and open to the public. Seating will be on a first come basis. In-person audience: face coverings are required. There is also an opportunity to watch the event remotely via a livestream at http://beav.es/UJC.

American Strings brings renowned artists from around the U.S. to Corvallis and Oregon State University for an in-depth look at how and why stringed instruments play such a profound role in American music.

“I love the harmonies of the Shook Twins, the dreamlike songs that seem somehow permeated by the American Folk tradition, without actually being part of it. They make music that twines through your soul the way vines cover an abandoned shack in the woods.” – Neil Gaiman, New York Times – Best-Selling Author

Hosted by the GRAMMY Museum’s Bob Santelli the OSU College of Liberal Arts and the Majestic Theatre, the conversation, and performance that comprises each segment of American Strings makes for a one of a kind opportunity to appreciate and know better the great American music tradition.