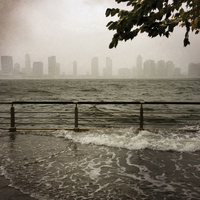 An Evening with Elizabeth Rush

Elizabeth Rush's most recent book Rising: Dispatches from the New American Shore was a finalist for this year's Pulitzer Prize in nonfiction. Hailed as "deeply felt" by the New York Times and “the book on climate change and sea levels that was missing” by the Chicago Tribune, Rising is both a highly original work of lyric reportage and a haunting meditation on how to let go of the places we love.

With every passing day, and every record-breaking hurricane, it grows clearer that climate change is neither imagined nor distant—and that rising seas are transforming the coastlines of the United States in irrevocable ways. Rush guides readers through some of the places where this change has been most dramatic, from the Gulf Coast to Miami, and from New York City to the Bay Area. Weaving firsthand testimonials and profiles of wildlife biologists, activists, and other members of vulnerable communities, Rising privileges the voices of those too often kept at the margins.

Rush was awarded an Andrews Forest Writing Residency through the Spring Creek Project in 2016, and one chapter in Rising is set at the H.J. Andrews Experimental Forest.