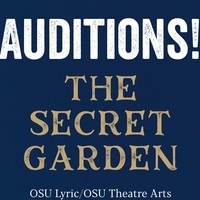 Auditions for OSU Lyric and OSU Theatre’s Winter 2020 production of The Secret Garden will be held November 18th and November 19th at 6:00 pm with callbacks on November 19th and (if necessary) 20th on the Withycombe Main Stage in Withycombe Hall (2901 SW Campus Way, Corvallis OR).

The Secret Garden is a musical based on the 1911 English children’s novel by Frances Hodgson Burnett with book by Marsha Norman and music by Lucy Simon. Set in 1906, young Mary Lennox is sent to live with her uncle following the death of her parents at the hands of a cholera outbreak in India. She discovers a forbidden secret garden, makes fast friends, uncovers the shrouded past of her family, and learns the power of love and rejuvenation and how it can combat the life-draining consequences of neglect.

The preliminary audition will consist of a singing audition. Please prepare 16-32 bars of music in the style of the show. An accompanist will be provided. Auditions are open to all. Please bring your schedules with any possible conflicts to the audition.

Callback auditions will consist of cold reads from the script in addition to prepared musical selections from the show. If called back, the musical preparation component will be assigned following vocal auditions.

Please sign up for a 30 minute time slot for your vocal audition at the following URL:

Expect to stay past your scheduled time slot for potential call-back assignments. Additional callbacks (if necessary) will be Wednesday November 20th at 6:00 pm.

There will be a cast read-through December 6 at 6:00 pm. Regular rehearsals will begin Sunday, January 5th and will be scheduled Sundays 12:00-6:00 and Monday through Thursday 6:00-10:00 pm. In addition, there will be occasional music rehearsals, as needed, held in Community Hall throughout Winter term on Tues/Thurs from 2-5 pm.

Actors who wish only to be considered for the non-singing roles of Mrs. Medlock and Mrs. Winthrop may present a 1-2 minute monologue in lieu of a vocal audition.

Questions can be directed to eversola@oregonstate.edu