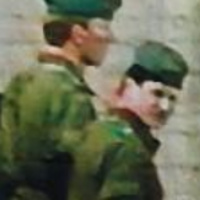 At the opening on October 28, 3-5 pm, Stefan Roloff will talk about his experience of growing up on the “island”of West Berlin, surrounded by the wall, and the way that experience has influenced his life and artistic concept.  He has been a featured speaker at Cooper Union, Columbia University and Amherst College, among others.  During his talk, the original footage of the 2017 exhibit will be screened.

At the end of October 2019, Stefan Roloff will transform the space of the Little Gallery and adapt the original Berlin exhibit to fit the walls of Kidder Hall.  The orange and gray colors of the gallery walls will be covered by wallpaper depicting the footage stills and silhouettes of the original 2017 exhibit.