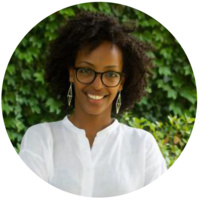 The Cabildos Speaker Series presents Adom Getachew with a talk titled "A 'Common Spectacle of the Race': Garveyism's Visual Politics of Founding."

In July 1920, just a month before the first annual convention of the Universal Negro Improvement Association (UNIA), the association’s co-founder, Marcus Garvey, announced, “We are a new people, born out of a new day and new circumstance.” The convention, he argued, was a moment of political founding on the model of the Philadelphia Convention in 1787. This talk will examine the UNIA’s conception of political founding, with particular attention to central role of images, theatricality and performance.

Adom Getachew is Neubauer Family Assistant Professor of Political Science and the College at the University of Chicago. She is a political theorist with research interests in the history of political thought, theories of race and empire, and postcolonial political theory. Her work focuses on the intellectual and political histories of Africa and the Caribbean. Her first book, Worldmaking After Empire: The Rise and Fall of Self-Determination, reconstructs an account of self-determination offered in the political thought of Black Atlantic anticolonial nationalists during the height of decolonization in the twentieth century. Adom holds a joint PhD in Political Science and African-American Studies from Yale University. She is on the faculty board of the Pozen Center for Human Rights, a fellow at the Chicago Center for Contemporary Theory, and a faculty affiliate at the Center for the Study of Race, Politics and Culture.

The Cabildos Speaker Series was established as a means to:

Sponsored by the School of History, Philosophy, and Religious Studies and the Aberbach History Program Support Fund.

Register for link to view via Zoom.