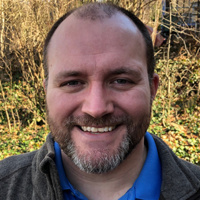 Automated and even fully autonomous systems are becoming pervasive across industrial workspaces, government areas of operation, and even in residences and civilian streets and gatherings across the world. We deal with a range of trust, assurance, security, and privacy with our intelligent systems, their interactions with us, and with each other. In this talk, I will discuss software research and middleware I’ve created over the past decade to try to create and enforce determinism, assurance, and trust in cooperative artificial intelligence that I’ve worked on for air, ground, surface, and space vehicles. I will outline results in emergent distributed systems and synchronous models of computation as a design philosophy and in software model checking and statistical model checking as applied to distributed collaborative systems in simulation and in teams of autonomous vehicles deployed in the real world. I will then briefly discuss some of the research topics I am moving into in assured AI including aspirations toward useful, emergent, and mission-focused swarms.

James Edmondson is a Principal Scientist at Galois where he focuses on the command and control, visualization, determinism, and trust of distributed artificial intelligence in robotics. His long-term goal is to make swarms easy, intuitive, and predictable, while also offering technologies and methodologies to combat adversarial swarms or malfunctioning swarms (e.g., countering emergent behaviors). Before he joined Galois, he worked at Carnegie Mellon University for nearly seven years within the Software Engineering Institute and Robotics Institute where he collaborated with students, faculty, and staff researchers to help push the state-of-the-art in distributed AI with specializations in air, space, and surface robotics. He earned a B.S. in Computer Science from Middle Tennessee State University and a M.S. and Ph.D. in Computer Science from Vanderbilt University.