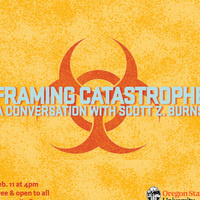 American writer, producer, director Scott Z. Burns is best known for his screenplays for The Bourne Ultimatum, the Informant!, Side Effects, and Contagion, as well as producing the seminal documentary on climate change, An Inconvenient Truth and its sequel, An Inconvenient Truth: Truth to Power.

Burns crafts stories that often deal with international catastrophes and the bureaucratic struggle within government agencies tasked with fixing them. His scripts are unique in their ability to translate specialized scientific, financial and legal information into compelling narratives without sacrificing accuracy.

In this timely, intimate, remote conversation Burns will discuss his work on Contagion and his ability to successfully straddle the lines between journalism and creative writing. He will also talk about how he sees Hollywood and the film industry changing post-COVID and what type of stories and ways of making film might be needed and in demand.

Free. Hosted by the School of Writing, Literature and Film in the College of Liberal Arts.

Register for dial-in instructions at https://beav.es/JwP