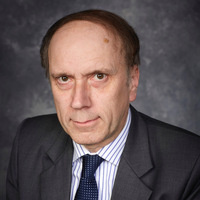 Abstract
To achieve cyber security, we need besides research and education, implementations, but even more important are deployment and proper regulations. The lecture surveys the state of the art in these five aspects of real life cyber security.

Although we see a lot of research in the field, its impact might be smaller than ever before. For example, we see a lot of research on privacy, but the population at large is indifferent to the almost total loss of privacy. Regulations that have been put in place are often ineffective (such as the one of the EU regarding cookies). Worse, deregulation has made the West so vulnerable that hackers from a Chinese IP address stole information about all US federal employees.

The lecture concludes with some positive notes and surveys positive applications of cyber security technology and the impact of education.

Speaker Bio
Yvo Desmedt is the Jonsson Distinguished Professor at the University of Texas at Dallas, a Honorary Professor at University College London, a Fellow of the International Association of Cryptologic Research (IACR) and a Member of the Belgium Royal Academy of Science. He received his Ph.D. (1984, Summa cum Laude) from the University of Leuven, Belgium. He held positions at: Universite de Montreal, University of Wisconsin - Milwaukee (founding director of the Center for Cryptography, Computer and Network Security), and Florida State University (Director of the Laboratory of Security and Assurance in Information Technology, one of the first 14 NSA Centers of Excellence). He was BT Chair and Chair of Information Communication Technology at University College London.  He has held numerous visiting appointments. He is the Editor-in-Chief of IET Information Security and Chair of the Steering Committees of CANS. He was Program Chair of e.g., Crypto 1994, the ACM Workshop on Scientific Aspects of Cyber Terrorism 2002, and ISC 2013. He has authored over 200 refereed papers, primarily on cryptography, computer security, and network security. He has made important predictions, such as his 1983 technical description how cyber could be used to attack control systems (realized by Stuxnet), and his 1996 prediction hackers will target Certifying Authorities (DigiNotar was targeted in 2011).