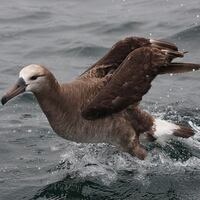 The little-known Heceta Bank is one of the most productive areas on the Oregon coast and a hotspot for biological productivity due to its position and the influence of northern coastal currents in summers. Join OSU marine scientists and other experts to screen a new, short documentary (26 minutes) featuring the submerged bank, located 35 miles off the Oregon coast, and learn about the surprising and beneficial impacts it has on our state’s coastal environments.

Introducing the film will be Joe Liebezeit, Portland Audubon’s Staff Scientist & Avian Conservation Program Manager. Joe will share the critical importance of Heceta Bank for avian species like the Short-Tailed Albatross, Black-footed Albatross, and Pink-footed Shearwater. Then following the screening, a panel, which includes Paul Engelmeyer, Portland Audubon’s Ten Mile Sanctuary Manager, will hold a discussion about Heceta Bank, including a Q&A session.

A special thank you to Oregon State Productions and Marine Studies Initiative for your research and allowing us to screen your film.