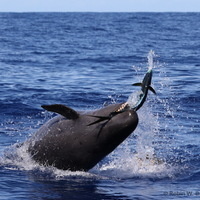 Topic: Science and management of an endangered species: false killer whales around the main Hawaiian Islands

Focused research beginning in 1999 revealed the existence of a small resident population of false killer whales around the main Hawaiian Islands, that was genetically differentiated from false killer whales elsewhere. As additional studies indicated high levels of persistent organic pollutants, evidence of fishery interactions, and a retrospective examination of sighting rates indicated a population decline, in 2009 NRDC petitioned NOAA Fisheries to list the population as endangered. A 2010 NOAA status review concluded the population was distinct and significant, and in 2012 this distinct population segment was listed as endangered. This presentation will explore the interactions between science and management for this endangered species.