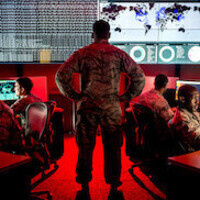 This talk examines advances in military surveillance, especially the recent automation of enemy identification and enemy engagement and elimination. It contextualizes this development within the history of military media escalation, which requires constant technological advances to overcome limitations in humans’ capacities to sense, learn, remember, react, and communicate. We’ll conclude by reflecting on these developments’ ongoing culmination in “lethal surveillance,” in which artificial intelligence (rather than “flawed” human intelligence) is entrusted with enemy elimination decisions.

Joshua Reeves is on the faculties of New Media Communications and Speech Communication at Oregon State University, where he teaches classes in media theory and rhetoric. He is an associate editor of Surveillance & Society, the international journal of surveillance studies. His first book, Citizen Spies: The Long Rise of America’s Surveillance Society, was released by NYU Press in 2017, and his second book, Killer Apps: War, Media, Machine, written with Jeremy Packer, will be available from Duke University Press in February, 2020.

Organization
School of Arts and Communication , Center for the Humanities
Contact Name