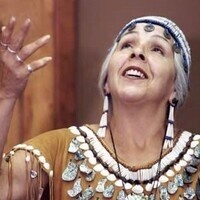 Dr. Samantha Chisholm Hatfield (Siletz and Cherokee) will discuss some of the underlining elements of Traditional Ecological Knowledge and Elder Esther Stutzman (Kalapuya and Coos) will share her experiences with TEK.  The Traditional Ecological Knowledge Club will also share information about how they integrate TEK in research, life practices, and personal development, with an enriching community discussion to follow.

Dr. Samantha Chisholm Hatfield is an enrolled member of the Confederated Tribes of Siletz Indians (Tututni and Chinook Bands), and is also Cherokee.  She has earned an American Sign Language Interpretation certification, a Bachelor of Science in Ethnic Studies with a concentration in Native American studies and a minor in Cultural Anthropology from Oregon State University. She holds her Doctorate in Environmental Sciences from Oregon State University. Her pioneering dissertation work has been considered groundbreaking research and heralded for the way she has melded physical and social science, combining empirical research with social science methodology.  Dr. Chisholm Hatfield's specializations include: Indigenous TEK, tribal adaptations due to climate change, Native culture issues, and Diversity and Equity issues.

Elder Esther Stutzman is a native Oregonian and traditional American Indian storyteller of Kalapuya/Coos heritage, a descendant of the Headman Camafeema (Halo ) of the Komemma/Kalapuya and is an enrolled member of the Confederated Tribes of Siletz Indians. She learned the stories from her grandmothers and she has been telling stories of the ancient ways for over fifty years. Esther works with Title VII Indian Education programs and Arts in Education Programs throughout the state of Oregon. She has been a long-time presenter for the Oregon Chautauqua History Series and a recipient of several Oregon Historical Society Folk Life awards. In 2017 she was presented with the Oregon Governor's Lifetime Achievement Award for her work with oral history and culture preservation.

Hosted by the Traditional Ecological Knowledge Club and the College of Forestry Diversity, Equity and inclusion Initiative.