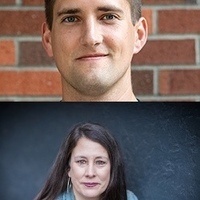 The School of Writing, Literature, and Film hosts its first Literary Northwest Series with Steven Moore and Wendy Willis. Both Willis and Moore will be giving a reading with a Q&A to follow.

Wendy Willis is a poet and essayist from Portland. Her recent book of essays, These are Strange Times, My Dear, was released in February 2019. Her last book of poems, A Long Late Pledge, won the Dorothy Brunsman Poetry Prize and was a finalist for the 2019 Oregon Book Award. She teaches poetry at the Attic Institute and is also the Founder and Director of Oregon’s Kitchen Table at Portland State University and the Executive Director of the Deliberative Democracy Consortium, a global network of organizations and leading scholars working in the field of deliberation and public engagement.

Steven Moore earned a BA in English from the University of Iowa in 2010 and an MFA in creative nonfiction from Oregon State University in 2016. His debut book The Longer We Were There: A Memoir of a Part-Time Soldier (University of Georgia Press, 2019) won the 2018 AWP Prize for Creative Nonfiction, and tells the story of the author’s seven years of service as an infantryman in the Iowa Army National Guard, from enlisting at seventeen, to training during college, to deploying on the Afghanistan-Pakistan border.

His nonfiction has appeared in Kenyon Review online; The Georgia Review; Ninth Letter; Entropy; War, Literature, and the Arts; North American Review; Southeast Review; DIAGRAM; and forthcoming in the anthology Why We Write: Craft Essays on Writing War (Middle West Press). He is a contributing editor at Moss: A Journal of the Pacific Northwest and currently resides in Corvallis, Oregon.