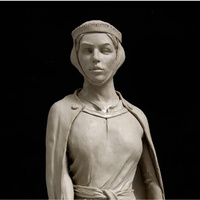 Messages from Beyond the Grave: The Last Wills of Medieval Jewish and Freed Slave Women

Premodern women in Europe left far fewer written records of their existence than men. Women from marginalized communities, such as former slaves and non-Christians, tended to leave even fewer texts in their own voices. Nevertheless, we can recover the voices and agency of some of these women in testaments, or last wills, that a significant number of them left for posterity.

In this talk, we’ll look at the genre of the medieval will and consider its particular power for women—especially Jewish and manumitted slave women—as a strategy of asserting agency, and as a mode of articulating their identities as individuals and as part of social networks. Material for this presentation is based on the intersection of two of Lauer’s current research projects: “After Slavery: Strategies of Living Free in the Late Medieval Eastern Mediterranean,” and the Jewish Women’s Wills collection, www.jewishwomenswills.org.

RENA LAUER studies cross-cultural contacts as well as minority and marginal communities in the late medieval eastern Mediterranean, including Jews, women, and freed slaves. She is the author of Colonial Justice and the Jews of Venetian Crete (University of Pennsylvania Press, 2019), and her work has been published in Mediterranean Historical Review, Critical Analysis of Law, and Gender & History, among other venues. Lauer teaches History and Religious Studies in OSU’s School of History, Philosophy, and Religion and leads the Jewish Women’s Wills project, a collection of wills and will-like documents written for Jewish women before 1600 CE.

Organization
Center for the Humanities , School of History, Philosophy, and Religion
Contact Name