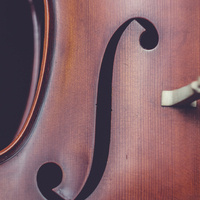 Live from the Memorial Union Lounge on the Oregon State University campus in Corvallis: Alex Carlson, violin and Angela Carlson, piano. Music a` la Carte opens the 52nd season with a nod to the series' original performance. Angela Carlson, who performed on the very first Music a' la Carte in 1969 with her violist husband Marlan Carlson, will accompany their son, violinist Alex Carlson in a program of works by British violinist Ethel Barns and Parisian composer Pauline Viardot.

Note: Live audience open only to Oregon State students, faculty and staff. Off campus audience may access a livestream at:
https://youtu.be/cZPEfe7LzTs

Alex Carlson received his B.A. in violin performance and B.S. in conducting at Southern Oregon University in Ashland. In 1999 he moved to Brooklyn, N.Y. where he composed music for numerous TV commercials, movie specials, and websites. During his time there Carlson played in several jazz and rock bands using a six string electric violin. He now lives in Portland with his two teenage boys, teaches music and is a member of the Corvallis-OSU Symphony, the Tualatin Valley Symphony, and a couple of jazz bands.

Angela Carlson recently retired from OSU after a 50-year career teaching music theory and literature. Carlson studied flute, piano and harpsichord at the University of Idaho, the University of Wisconsin, the Guildhall School of Music in London, and the Aspen School of Music. She served as opera preview lecturer for the Linn-Benton Opera Guild for over two decades and as accompanist for many local and OSU music events during the past forty years. For many years, Carlson has enjoyed writing program notes for the Corvallis-OSU Symphony orchestra and serving on the board of Chamber Music Corvallis.

Program Notes by Angela Carlson:
British violinist Ethel Barns studied violin, piano and composition at the Royal Academy of Music in London, graduating with many honors in 1895. She concertized as both soloist and chamber musician, often performing her own compositions, especially on the concert series she ran with her husband, Charles Phillips, from 1899 to 1913.  She composed more than one hundred works, about half of them involving the violin.  In an era in which compositions by women were expected to conform to feminine norms Barns wrote many salon-style pieces, but sometimes broke the mold as in “Hindoo Lament”.  She possessed the ability to write quite simple music that is still deeply musical and rewarding to play.

Pauline Viardot was born Pauline Garcia, daughter of two opera singers. From a young age she traveled with her family as her parents pursued their careers.  By the age of six she was already multi-lingual and precociously musical.  She and her sister Maria became famous singers in their twenties, although Maria died at age 28 after a fall from a horse.  In 1840 Pauline married Louis Viardot, a well-known Parisian writer and theater director 21 years her senior. In Paris Pauline mixed with most of the well-known musicians and intellectuals of the time, often performing with Frederic Chopin. The “Mazourke” in this set of six pieces is reminiscent of Chopin’s Mazurkas, several of which Viardot arranged for voice and piano. Brahms wrote his “Alto Rhapsody” for her, Saint-Saens wrote “Samson et Dalilah” with her voice in mind.  Schumann, Gounod, Meyerbeer and Fauré all wrote vocal music for her.

Viardot had a happy family life with a son Paul who became a concert violinist, daughter Louise who became a composer and writer, as well as two other daughters who became concert singers.  In her ‘’spare” time Viardot wrote more then 100 songs, four operettas, an opera, many piano works and two volumes of violin music.