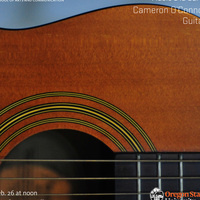 Acclaimed as "stunning and emotive" (Eugene Register-Guard), Oregon State University guitar instructor, Cameron O’Connor enjoys a diverse career in solo, chamber, and contemporary music. His recent performance highlights include solo and duo recitals at Gendai Guitar and the Nagano Guitar Seminar in Japan; performing as a guest artist at the Loyola Marymount, Corvallis, Siempre la Guitarra, and Northwest Guitar Festivals; chamber music and opera appearances; as a chamber music soloist and performing with Michael Tilson Thomas at the New World Symphony; appearing as a guest artist and performing duos with Sharon Isbin at the Aspen Music Festival and School. He also appeared under the baton of Chinese composer Tan Dun in his Eastern-tinged Concerto for Six, about which the New York Times noted that “O’Connor fluttered on his guitar strings in a manner reminiscent of a pipa player’s technique.”

O’Connor is a prizewinner in many international competitions, including the Frances Walton and Tokyo International Guitar Competition. His playing has been featured in films and broadcast. His recording of Michael Lee's “Unmasked” (written for O'Connor) was chosen for Ablaze Record's Millennial Masters, distributed by Naxos. O'Connor also performs regularly for musical theatre productions on electric guitar, banjo, and mandolin, as well as in early music settings on the vihuela and lute.

As a composer, O'Connor's “Three Northwestern Scenes” was chosen for a performance at the 21st Century Guitar Conference in Ottawa, Canada, and his “Perturbation Variations” won the 2019 Keene State College Call for Scores and was awarded the "Outstanding Winner" prize at the Changsha International Guitar Festival in China.

O’Connor was a full scholarship recipient at CSU Northridge, where he studied guitar with Ron Borczon and lute with Ron Purcell; the Juilliard School in New York, where he studied with Sharon Isbin; and at the USC Thornton School of Music under William Kanengiser.