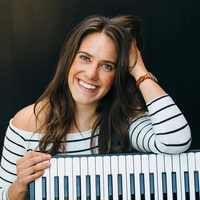 Straka (previously Baker) is a professional accordionist, singer, pianist, and composer from Portland, currently residing in Denver.  She earned bachelor of arts degrees from Oregon State University in piano performance, vocal performance, and choral music education, and holds  a Master of Music in vocal performance and pedagogy from the University of Colorado Boulder. Throughout her career, Straka has won multiple international accordion competitions, worked as an artist for the prestigious Roland Corporation, sung leading operatic roles, and has performed at notable venues including Carnegie Weill Hall and the Sibelius Academy in Helsinki. Alicia currently teaches private students, and is an active performer, composer and arranger.

Alicia will perform a selection of fun music featuring her accordion and voice; including jazz, French café, pop, and perhaps even a polka or operatic treat. Tune in for a wide variety of joyful music on an instrument that's full of surprises! The Music à la Carte Facebook page can be found at: https://beav.es/4Ns. Facebook Live events are free to view.