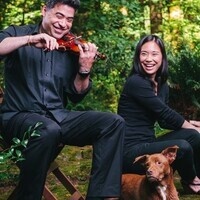 Viola/piano duo Kenji Bunch and Monica Ohuchi collaborate in all facets of their lives. As a performing duo they appear frequently on recordings, in recitals, workshops, live broadcasts, and lecture-demonstrations across the country. They serve as the Artistic and Executive Director of longtime Portland new music group Fear No Music, as collaborators on new compositions including a piano concerto and book of solo piano performance etudes, and as instrumental instructors at Reed College. Most significantly, they have been a married couple since 2007 and are the parents of two children. With five degrees from the Juilliard School between them, Bunch and Ohuchi left New York City in 2013 to return to their Pacific Northwest roots and raise their family.

They return to Music a la Carte with a Facebook Live performance from their Portland, Oregon home.