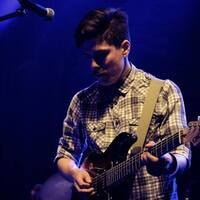 The multi-genre guitarist, singer, bassist and educator, William Seiji Marsh will give a 30 min. live performance on the Music a la Carte Facebook Page.

The Music à la Carte Facebook page can be found at: https://beav.es/4Ns. Facebook Live events are free to view.

Marsh, a former Oregonian who now resides in Southern California, contributes his guitar skills to many of Oregon’s staple and up-and-coming artists. He currently performs internationally with Portland’s crossover classical/jazz/pop polyglots, Pink Martini; as well as genre-bending powerhouse singer/guitarist/whistler, Edna Vazquez.  In the past he has toured and recorded with platinum-record-selling swing/rock outfit Cherry Poppin’ Daddies; Portland’s indie-rock favorite, Lost Lander; and Billboard-topping singer and songwriter, Halie Loren.

Marsh thrives on variety in his career, and as a result has developed a wide stylistic range. When he is not on tour, he finds great joy in aiding guitarists’ musical development. He has maintained a private guitar studio in Portland’s prestigious Falcon Art Community, and has been on the guitar faculty at Willamette University and Reed College. He also co-owned/co-directed Harmony Roadhouse Music Studios in Eugene.