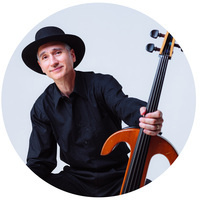 Composer, performer and cello innovator, Gideon Freudmann will give a live remote performance as part of the College of Liberal Arts/School of Arts and Communication's Music a` la Carte concert series.

The performance is free to view through Zoom and will also be livestreamed on the Music a` la Carte Facebook page: https://beav.es/4Ns

Freudmann, who lives in Portland, has been on the forefront of the cello's modern creative expansion for more than 30 years. In the early 1980s, his formal education at the University of Connecticut laid a solid classical foundation for what has become a diverse soundscape encompassing a wide range of musical genres.

Among the many innovative musical avenues he followed was to adopt the electric cello to craft the sound for which he is most known today. Using foot-operated effect pedals, he took his live performances into new territories of looping, soaring, multi-layered compositions and improvisations.

With early success as a performer on the East Coast well established, Freudmann moved to Oregon in the mid-2000's where he is a founding member of the Portland Cello Project and the band Caravan Gogh. He has also branched into live soundtrack accompaniment to silent films.

Grab you lunch and join us for an enjoyable mid-day music interlude with the creator of "cellobop" himself, Gideon Freudmann, live from his Portland studio.

Music a` la Carte, the lunch-hour "brown bag" series usually takes place in the Memorial Union Lounge, and has been a Friday tradition at Oregon State since 1969.

Art and Entertainment, Health and Well-being