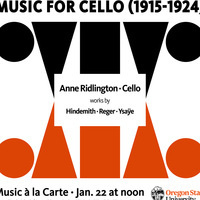 Anne Ridlington is a Corvallis native who started her musical studies early, first taking violin lessons with Peg Varvel and Aida Baker, and later cello, with Nancy Sowdon and Hamilton Cheifetz of Portland. She spent many years playing in local youth orchestras under the direction of Ms. Sowdon, Penelope Wolff, and Charles Creighton.

Ridlington earned her Bachelor of Music in cello performance at Indiana University School of Music, where she studied primarily with Tsuyoshi Tsutsumi but also took lessons with Helga Winold, Emilio Colón, and Janos Starker. She spent a year playing in the Lübeck Philharmonic Orchestra in Germany, and a year in Santa Barbara, California, playing on the sidewalk for tourist dollars. Since returning to Corvallis, Ridlington has taught in the Elementary Strings Program and at the Corvallis Waldorf School and gives private lessons.

On the program: Hindemith, Reger and Ysaÿe.