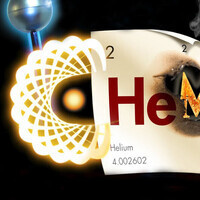 "New Chalanilines A from Chalara sp. Fungus and Total Synthesis of Chalaniline B" and "Regioselective Formations of Indolines,Indoles and Carbazoles" & "The existing methods “how to determine the internal temperature of a cluster. "

Khoshbakht - Natural products and derivatives have served as a major source for drug discovery for centuries.  Exploring the filamentous fungi to access their diverse chemical repertoire, it was previously reported that perturbation of the Chalara sp. 6661, producer of the isofusidienol class of antibiotics, with the histone deacetylase (HDAC) inhibitor vorinostat resulted in the production of new modified polyketides: chalaniline A (ChalA) and chalaniline B (ChalB). Both compounds incorporate an unusual anilino moiety
which is derived from the vorinostat used to promote their biosynthesis. ChalA exhibits moderate cytotoxicity and ChalB shows potent activity against multi-drug resistant Staphylococcus aureus. The results of ongoing work to explore the chemistry and biology of the chalanilines via a combination of biochemical mutasynthesis and total synthesis will be presented. In part one of the lecture, the production, isolation, and structure elucidation (by NMR, MS) of five new ChalA analogs from Chalara cultures (0.5-2 mg/L yield) will be described. In each case, the new compound was obtained by incubating the fungus
with a different vorinostat derivative. In part two, the development of a successful elaboration of ChalB from 2-hydroxyxanthone by a route incorporating strategic oxidations followed by regioselective introduction of nitrogen- and carbon-based moieties to the resulting 1,3-dibromo-2,8-dihydroxyxanthone derivative, will be presented. With these results in hand, we are now poised to study biological SARs with the optimal methods being used to explore a given chalaniline chemotype.

Points - From Hallucinogens to Antivirals, Indoles and Carbazoles occupy a central place among biologically active compounds in medicine. New strategies will be presented for the synthesis of these motifs which allow the introduction of different chemical substituents in previously difficult to accomplish ways. A Diels–Alder reaction-based strategy for
the synthesis of indoles and carbazoles will be described; using an intramolecular cycloaddition of alkyne-tethered aminopyrones gives substituted indolines or carbazoles in good yield and with complete regioselectivity. This method is showcased in a total synthesis of carbazole natural product Clausine C and the formal synthesis of lysergic acid. This strategy will be further be used to prepare new drug analogues to explore the molecular activity of these agents in biological systems.