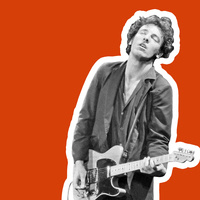 Join Rock Historian Bob Santelli, university director of popular music, and OSU student Colson Legras for an online listen and discussion of some of the greatest rock and pop albums of all time. This debut album from "The Boss," Bruce Springsteen, was released in January of 1973. The album, which included hits "Blinded by the Light" and "Spirit in the Night" is ranked as one of Rolling Stone's 100 Greatest Debut Albums of All Time. When it was released by Columbia Records, it initially garnered positive reviews but average sales. We'll talk about that, The Boss, and the making of this great American album at the November meeting of the OSU Album Club. Registration is required for link to participate. Free, open to all.