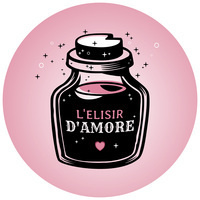 In Act I, Nemorino, mooning over Adina as usual, droops in defeat when the dashing Belcore appears. He rushes to the quack Dulcamara and spends all his money on an elixir that guarantees love. It’s really only wine. Nemorino gulps it down, and his drunken antics drive Adina into a hasty acceptance of Belcore’s proposal.

Act II, and it’s almost wedding time. Nemorino needs more elixir, so he signs up for the army to get quick cash. In the meantime, his rich uncle has died, leaving our hero a rich man. The village girls swoon, and Nemorino, thinking it’s the potion, courts Adina with newfound charm. She spurns Belcore, gets Nemorino out of the army, and gives her heart to the right man at last.