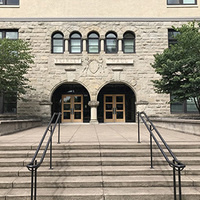 Open to the public.

Abstract: Coastal communities in the U.S. Pacific Northwest (PNW) are rapidly engaging with the idea that hazards and environmental pressures are changing and may be characteristically different in the near future. This has led to a need for scientific knowledge and tools that can help coastal communities prepare and build resilience in the face of changing risk. This is especially true for coastal systems that experience multiple and complex hazard drivers. In these systems, extreme events can result from the sum of multiple drivers and it is unclear how the changing climate will impact the overall sum. This dissertation focuses on such a system, specifically estuaries, and provides key steps towards characterizing how the risk of flooding will change through time. This is broadly approached through developing tools, methodologies, and predictions for PNW estuaries, but the developed tools and approaches should be applicable to other regions as well. Estuarine hydrodynamics are changing as a result of the changing climate. Our current best predictions for how the climate is evolving come from global climate models (GCMs). However, climate models often exhibit bias when compared to observations. These biases can propagate through a modeling framework and lead to corresponding biases in predicted flood magnitude. Chapter 2 of this dissertation evaluates a tool, statistical bias correction (BC), for removing bias from model output. This chapter examines a variety of BC procedures as applied to GCM-forced wave model output. BC methodologies are generally applicable but waves are chosen for testing due to large biases (from poorly resolved GCM wind fields) and because waves are significant contributors to coastal flooding in the PNW. BC is shown to be an efficient and effective method for removing bias. Particular emphasis is placed on evaluating the difference between univariate and bivariate analysis with results demonstrating the importance of considering correlation between variables when performing corrections. All methods are evaluated under a nonstationary climate with extensions developed to BC methodologies for this new context. A primary difficulty with quantifying future flooding hazards in estuaries is that extremes are controlled by a variety of forcing (e.g. waves, streamflow, El Nino, winds, etc.), all of which may change in the future. This is investigated in Chapter 3 using a multi-component modeling framework which considers the combined evolution of estuarine forcings under climate change. Forcings are simulated with sub-models and then used as inputs for decadal-scale hydrodynamic simulations. This modeling framework is utilized for two climatological periods (historic and future) and for two study sites (Coos and Tillamook Bays). It is found that extreme water levels (e.g., 100 year return interval events) exhibit spatial variability with magnitudes increasing with distance into the estuaries. For the climate model studied, forcing of extreme events relaxes into the future, but this effect is eventually overcome by sea level rise (SLR). Overall results show significant system complexity, highlighting the importance of physically modeling multiple processes relevant to flooding rather than considering a simple SLR adjustment. The process-based modeling in Chapter 3 has the advantage of resolving many physical processes, but has the disadvantage of requiring significant computational resources. Chapter 4 evaluates an alternative hybrid methodology (process-based and statistical) that seeks to calculate water levels with much greater computational efficiency. Specifically, an emulation-based approach is evaluated which replaces the process-based model with a fast statistical representation. Emulation is validated against a variety of observations and is found to be skillful with reasonably low overall error. A hierarchical validation finds that the largest loss of skill in emulator construction is associated with the process-based model attempting to reproduce observations. After emulator construction, simulation time is nearly instantaneous, making emulation a promising strategy for a variety of research questions such as probabilistic future flood hazard assessments.