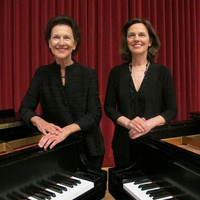 Rachelle & Robin McCabe: A Celebration of Leonard Bernstein and More

The School of Arts and Communication presents a special concert for our community that is both a dynamic reunion performance by the popular McCabe Sisters piano duo, and a celebration of the 100th birthday of Leonard Bernstein.

Performing on two concert grand pianos at the LaSells Stewart Center, sisters and duo-pianists Rachelle and Robin McCabe will open with one of the most revered works written for two pianos, "Variations on a Theme of Haydn," by Johannes Brahms. Rounding out the first half, and joining in the global "Bernstein at 100" celebration, the McCabes will present an energizing arrangement of  "Symphonic Dances from West Side Story."

The second half of the concert will begin with the exciting rhythms, colors and dark harmonies of Andalusian folk music, as the sisters perform "Three Andalusian Dances" by Manuel Infante. The concert finale will be an elaborate fantasy on beloved, popular songs from George Gershwin's Porgy and Bess, including "My Man's Gone Now," "Summertime," and "I Got Plenty O' Nuttin'."

"We're so attuned to the way the other plays," Robin has said. "We each know how the other will end a phrase or curve a line. We can read each other."

Rachelle describes playing with Robin as "...a conversation between two people, but the two people are sisters who know each other inside and out. There is a lot of intuition, trust, love and respect."

The duo has not performed for the Corvallis audience in several years. They performed this program in Seattle in January, 2018. In October, they will take the concert to Beijing where they will perform and teach at four of China's top music conservatories: Central Conservatory, China Conservatory, Capital Normal University and Renmin University.

They are very much looking forward to performing again in Corvallis and to presenting this program at Oregon State University.