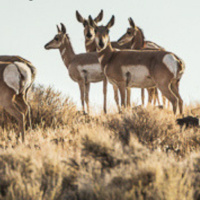 Rewilding a Mountain - Film Screening & panel discussion with the Scientists

Follow scientists as they unravel the controversy and mystery of Hart Mountain, deep in the sagebrush sea. This film captures rewilding of Hart Mountain National Antelope Refuge in Southeastern Oregon. New aspen explode alongside thriving creeks, migratory birds nest in expanding willows and even pronghorn and the endangered sage grouse seem to be recovering.

The film unravels an unsettling controversy that challenged the core identity of the West and follows a team of scientists who ask the question: what happened here?