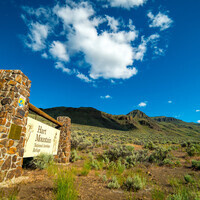 This award winning film captures the rewilding of Hart Mountain National Antelope Refuge in south-central Oregon. This film unravels an unsettling controversy that challenged the core identity of the West & follows a team of scientists who ask the question: What happened here? Film followed by Q&A with producer, Bill Ripple and scientist, Boone Kauffman. Free pizza at 6:00 pm & film starts at 6:30 pm. Film trailer is at https://filmfreeway.com/RewildingaMountain

It was very informative and educational.