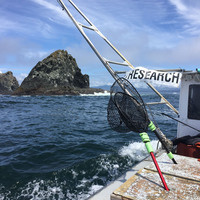 Ever heard of a marine reserve? Or wondered what’s lurking below the
surface of the ocean off our coast? Come take a virtual underwater tour of
Oregon’s five marine reserve sites - areas off our coast that have been
designated for conservation and scientific research. We’ll take a dive
underwater at each of the sites and see what habitats and marine life call
these places home. We’ll explore the scientific research being conducted
and some of the innovative underwater research tools being used. Join us
and see for yourself that Oregon doesn’t stop at the beach.
Explore more on the state’s Oregon Marine Reserves website at
oregonmarinereserves.com.