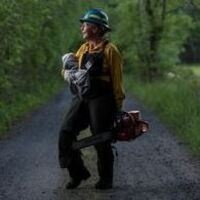 Cultural use of fire has long influenced natural landscapes throughout the world, providing humans with important resources and connecting them with nature, in addition to moderating wildfire risk.  In many places, such as the Willamette Valley, pre-contact biodiversity of prairies, savannas, and woodlands wholly depended upon frequent indigenous burning as often as every year.  The burning practices of the indigenous peoples of southern Oregon and northern California met natural ignitions to maintain some of the most resilient and biodiverse forests in North America.  Forests and rangelands alike have long been shaped by the coalescence of natural ignitions and indigenous burning practices.

Colonialism is largely to blame for the cessation of anthropogenic fire in North America.  Fire exclusion, including suppression of forest and rangeland fires caused by lightening as well as the cessation of indigenous burning, was mandated in the US after the fires of 1910.  The dire consequences of fuel accumulation that resulted from this approach became apparent before the century was over.  As a response to the wildfire problem that we all face today, prescribed fire offers the direct benefit of wildfire hazard mitigation, as well as opportunities for people from all walks of life to connect with nature and how it is affected by different kinds of fire.

will this also be streamed?