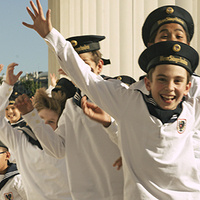 The School of Arts and Communication at Oregon State University presents the world renowned Vienna Boys Choir in two performances at the First Methodist Church in Corvallis.

Boys have been singing at Vienna's Imperial Chapel since 1296. Emperor Maximilian I moved his court to Vienna in 1498, founding the Chapel Imperial and the Boys Choir. The court attracted many musicians over the centuries, including Christoph Willibald Gluck, Antonio Salieri, Wolfgang Amadeus Mozart, and Anton Bruckner; Joseph Haydn, Michael Haydn, and Franz Schubert who were all choir boys. The boys sang exclusively for the imperial court – at masses, celebrations, and on state occasions – until 1918 when a touring choir was formed.

Today, there are 100 choristers between the ages of nine and fourteen, divided into four groups. Between them, the choirs give around 300 concerts each year, attended by half a million spectators around the world. Since 1924, 2502 choristers have sung over 1000 tours in 98 different countries.

On Sundays, the Choir performs with the Vienna Philharmonic and the State Opera Chorus in the Imperial Chapel, as it has done for the last 520 years.

The Choir also performs with major orchestras, conducted by the likes of Zubin Mehta, Riccardo Muti, Franz Welser-Möst, Simone Young. A highlight are appearances at the Vienna Philharmonic's New Year’s Concert, most recently in 2016 under the baton of Mariss Jansons.

Since their first recording in 1907, the boys have recorded 377 shellacks, singles, LPs, and CDs – the latest, “Strauss For Ever”, to be released this fall on Deutsche Grammophon..

Three-hundred boys and girls attend the Choir's schools. A quarter of the schools’ alumni become professional musicians. The Choir’s education and singing tradition is listed by UNESCO as intangible cultural heritage in Austria. Professor Gerald Wirth is the choir's president and artistic director.