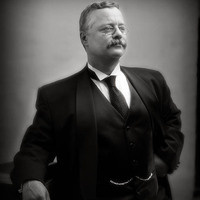 Joe Wiegand is the nation’s premiere reprisor of Theodore Roosevelt. Joe’s live performances have been featured at hundreds of historic places associated with TR’s life and legacy. Joe has been featured at the American Museum of Natural History in New York City and served as the body model for the seated naturalist Roosevelt bronze sculpture in Roosevelt Memorial Hall at the Museum. Featured at the official National Park Service Centennial Celebration at Yellowstone National Park, Joe’s Theodore Roosevelt is based on solid scholarship and delivered with Rooseveltian showmanship.

Cosponsored by the History Student Association & the School of History, Philosophy & Religion.