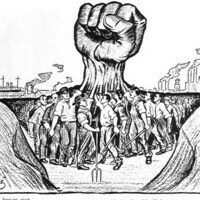 Toiling in the Shadows of Affluence: Immigrant Labor and Livelihoods in the New Gilded Era

A talk by Ron Mize, School of Language, Culture, and Society

Since the 1990s, the resort enclaves of Aspen, Vail, Jackson, and Park City have experienced a major increase in the percentage of Mexican and Latin-x residents. They are not coming to ski, but to work—primarily in the service industry, catering to the wants of the wealthy. Over one hundred years ago, the labor of “new” immigrants in these growing mining towns provided a major source of wealth for the richest families of the day: the Rockefellers and Guggenheims, Carnegies, Osgoods, and Goulds. In this talk, Ron Mize will discuss his archival research into the development of immigrant mining labor and labor unions in the first Gilded Age and consider how that context informs the serving-class struggle in the New Gilded Era.

Ron Mize teaches courses in Ethnic Studies at OSU. His historical research focuses on the origins of racial, class, and gender oppression in the lives of Mexicano/as residing in the United States, especially as they relate to sectors of rural spaces and the economy. Mize was trained as a journalist at the University of Colorado Boulder and went on to study Sociology at Colorado State University (M.A.) and University of Wisconsin-Madison (Ph.D.).  In 2016, he was the Fulbright-Garcia Robles Chair in U.S. Studies at el Instituto Tecnológico Autónomo de México.

Organization
School of Language, Culture, and Society, Center for the Humanities
Contact Name

OSU Center for the Humanities