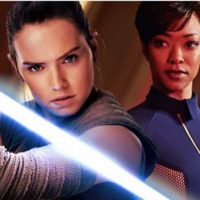 For over 40 years, Star Trek and Star Wars have excited generations of fans with memorable heroes and visions of the galaxy. Join us for the second annual Trek Wars event at Oregon State where we try to decide: which universe has the most compelling heroic women characters?

Panelists include Randall Milstein, Astronomer in Residence with the NASA Space Grant Consortium, instructor of the science of science fiction, as well as physics, and a cosplay photographer at science fiction conventions; Joseph Orosco, a professor of philosophy and peace studies who has taught a number of philosophy-based courses on “Star Trek at OSU,”; Chryss Allaback, a theater professor and Eugene Trek Theatre’s artistic director; and Emily Simpson, a recent graduate of the OSU History of Science graduate program and a space historian, as well as a astronomy professor at OSU.

We will be giving out prizes for outstanding cosplay (costumes are not limited to Star Trek/Star Wars, but any sci-fi universe), as well as for your Star Wars/Star Trek trivia knowledge!

Pizza will be provided.