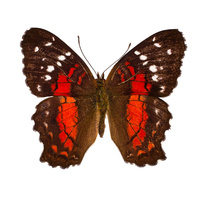 Join us for Unearthed: Composers Kristina Dutton & Lisa Schonberg Premiere Original Scores for Smithsonian Archive Butterfly Research Films. The event will include screenings of two short films as well as an artist talk by Dutton and Schonberg.

Rearing Anartia and Sulfur Butterflies are 8-16 mm films documenting the work of lepidopterist Bob Silberglied in the seventies. Silberglied's untimely death in a plane crash left behind an undiscovered body of work, including these two research movies. Fifty years later, Dutton and Schonberg digitized the films held in the Smithsonian Institution's archives and added original musical scores. These films are an early testimony of how creative scientists intended to communicate their passion for the study of nature to broad audiences. The artists are honored to help in this task as they premiere the scores for these films.

Free and open to everyone. Sponsored by the Spring Creek Project, the OSU Department of Integrative Biology, and the OSU Arthropod Collection.

More about the films:

Sulfur Butterflies features Silberglied and Chip Taylor conducting research in southwest Arizona in alfalfa fields that contained incredible densities of butterflies at that time, allowing them to study in depth how females recognize the males of their own species based on ultraviolet coloration.