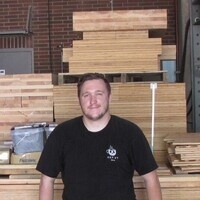 WSE Defense: Reassessment of Grading Criteria with Respect to the Flexural Properties of Douglas-fir Crossarms

Wood plays a key role in modern electrical infrastructure; crossarms and power poles utilize the high strength to weight ratio, availability and low cost of wood to facilitate the access of power to millions of Americans. Current grading criteria for crossarms are very strict, potentially rejecting sound wood due to the complexities involved with the relationship between knots and strength. In order to determine whether the current grading criteria was rejecting sound arms, knots were mapped on 250 crossarms. 200 arms were rejected, 50 were non-rejected. All of the arms were broken in a bending test that simulated loads in the field. Resulting strength values were compared with the knot maps and between populations using various statistical analyses.

The results from the analyses suggest that while a large percentage of the arms currently rejected had acceptable capacity, attempts to relate characteristics to capacity were generally poor. Visual grading successfully ensured that the acceptable population met minimum strength requirements; however, many of the arms rejected by visual grading exceeded minimum strength requirements.

Hunter was born on the Oregon coast where he grew up until his mother, sister, and he moved to central Oregon. He spent the remainder of his young life in central Oregon attending Redmond High and then enrolling in Oregon State University where he received his undergraduate degree in civil engineering and is currently pursuing a Master’s degree in Wood Science and Civil Engineering.